PurelyPixel by Karina Coombs is licensed under a Creative Commons Attribution-NonCommercial-NoDerivs 3.0 Unported License.
Based on a work at http://www.purelypixel.com. 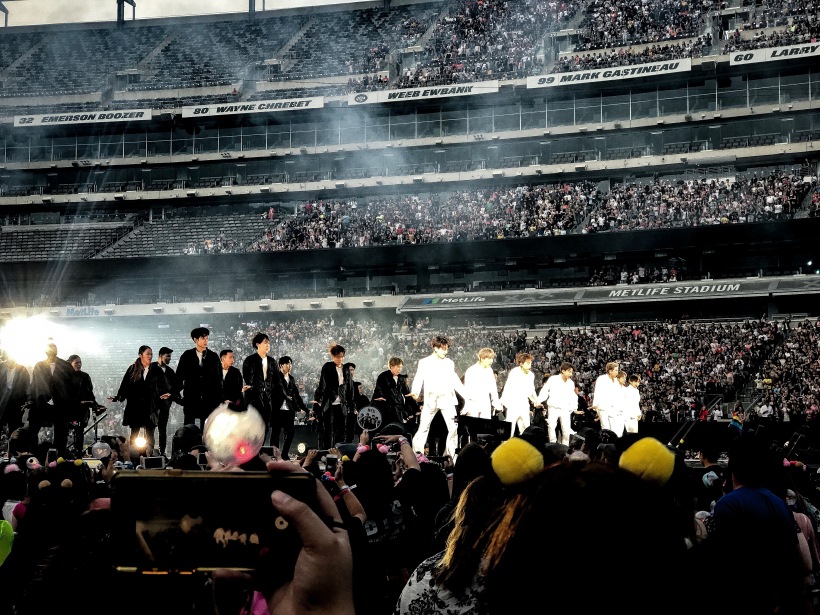 Music has never meant as much to me as it did when I was 14. Even in my 20s when I spent the bulk of my money and evenings watching my favorite bands perform throughout Boston, the connection was muffled. Alone in my room with headphones, record on repeat, and pouring over lyrics while sitting on the floor? That’s where the magic happened. I felt seen for the first time.

So when my favorite band came to Massachusetts and my parents said I was too young to go, my bedroom once again provided escape. The night of the concert arrived, and while my best friend was at the show watching our boys do their thing, I was alone in my room, listening to the saddest music I could find in my parents’ collection to match my mood (Johnny Mathis), and sobbing.

“If I ever have a daughter I swear I will never do this to her,” I told my cat more than once that night.

I finally got to make good on this promise in 2019, when my then 13-year-old daughter mentioned that her favorite group had just announced a new tour.

“We’re going,” I told her before she could even finish talking. “Where are they playing?”

“New Jersey? But tickets are really hard to get.”

“Okay. We’ll figure it out,” I promised. “A four hour drive is nothing to see your favorite group.”

Music as a gateway

I don’t recall my parents ever taking an interest in my music growing up. In fact, until I was around my daughter’s age, my access to popular culture was pretty controlled, including certain radio stations that were considered off limits. But then we got cable TV and I became the first group of teenagers with regular access to MTV. It was a game changer.

Being a Duran Duran fan in a small conservative town in the early 80s was to be ridiculed daily and for years. I was surrounded by a sea of Aerosmith, ACDC, and Van Halen fans whose music was as baffling to me as mine to them. The key difference being they were pretty vocal about it. Thankfully, I had an ally in my best friend. We traded albums, magazines articles, and theories on key lyrics.

My interest in the band led to an increased awareness of the world, which pre-Internet was focused primarily on the import section at the local record store and exotic snacks from a small UK-themed shop in town. I read about Sri Lanka at the library after watching my favorite video, began watching the world news and studying the living room globe, and started to think about a life outside of my town and all its possibilities.

With the fog of adulthood, I was slow to catch on to the growing importance of music in my daughter’s life and what that might mean. She’s a quiet kid who keeps her interests to herself most of the time. In fact, the more important something is to her, the less likely I am to hear about it. And while I knew she was listening to a particular group, I didn’t go out of my way to learn about them them early on because I wanted to respect her space.

Like a vampire waiting for an invitation inside, I finally got mine in 2018 when she asked if we could go to the BTS movie, Burn the Stage. The whole family went to the local AMC and met RM, V, Suga, J-Hope, Jimin, Jin, and Jungkook. More importantly, I saw her reaction to them and I finally got it.

CDs, posters, YouTube videos, books, and magazines would follow as her interest grew. It didn’t matter at all that the lyrics were in Korean. At first she loved the songs for their sound alone, not understanding the lyrics. But then she’d go online and find translations and ruminate on their meanings, often finding a connection to how she was feeling. She felt seen.

And I felt hopeful.

Changing a life, one song at a time

If you’re not a parent or don’t have a child with anxiety, depression, and/or learning issues, you may not appreciate the change we saw in our daughter between 2018-2019. The kid who dropped out of band in elementary school because she couldn’t figure out how to read sheet music and thought she was stupid began to realize she could “see” music. The kid who’d never taken a piano lesson began to play BTS songs by ear on a keyboard at home, eventually graduating to a piano.

The daughter I didn’t even know could sing, began loudly singing (in both English and Korean somehow) around the house, asking to take voice lessons where she would eventually convince her opera-trained coach into working on a BTS piece. Singing and playing music then led to her teaching herself how to use music production software so that she could make recordings, add layers, and mix and upload covers of her favorites.

My locally focused child began reading about South Korea, its culture and language. My picky eater now wanted to try Korean food (and then Chinese, Japanese, Taiwanese, Indian, etc.). We began shopping at a local Korean market for groceries. Both of my daughters became rabid manga and anime fans and began teaching themselves Korean and Japanese. There are even tearful please for travel abroad (and honest discussions about the prohibitive cost involved) from kids who are deathly afraid of airplanes.

The entire world opened up to my child because of her love of BTS. Of course I was going to drive her to New Jersey to see them.

Making good on that promise

The preparation I undertook to ensure I was ready for the Ticketmaster sale will never be revealed in its entirety because it’s embarrassing. But I will say it generally required the effort of the entire family, multiple training sessions, and drilling into the floor to run an Ethernet cable. In the end, I was successful beyond my wildest dreams: getting two floor seat tickets and the best seats I have ever had for any concert (and cautioning my daughter that it will probably never happen again).

Getting to see my daughter attend her first concert and to see her favorite group is something I’ll never forgot. The tears she shed upon learning she had tickets. The nervous planning for a stadium show of 50,000 plus for a kid who doesn’t like crowds or loud sounds. The sleepless night before the early morning drive from Massachusetts. Our adventures along the Merritt Parkway. Eating bologna sandwiches in a shadeless stadium parking lot on an unseasonably warm spring day. Merch. Hearing the first sounds of the BTS soundcheck floating up and out of the stadium. The wristband placed on her wrist when the gates finally opened. Seeing her seeing them sing and dance in front of her. The fan chant. A flying Jungkook. Confetti cannons. Jimin and V on a bouncy house. Tens of thousands of phones lighting the sky. Fireworks.

She was quiet for it all.

“Did you like it?” I asked as we drove to a local hotel after the show.

“Did you record much?”

“I didn’t see your phone up that much compared to people around us.”

“No, I wanted to be there. To really be there and take it all in. To remember it in my brain instead of on my phone. You know?”

One thought on “Thank you, BTS”