A few nights ago, when the temperature dropped into the low to mid-40s, Ben tripped a circuit breaker after plugging in a small space heater in one of the bedrooms.  The girls were in the tub and the entire new addition of the house went dark.  There was much screaming and splashing of water.  We tripped a circuit breaker again the other night after turning up the cool setting on the freezer and then daring to use the microwave.  The microwave and fridge share an outlet and clearly there is a fixed amount of power negotiated between them. There was much husbandly grumbling about electrical needs and wants.  We knew we were going to be living in an old house obviously, but didn’t know the electricity was also dated.  “Did Barbara tell you about the electricity and using air conditioners?” the handyman had asked last week while de-mousing our oven.  “No.  She didn’t.”

The signal strength seemed good and the house was restored to a decent condition so we assumed plumbing and electricity would be non-issues and hadn’t talked with the realtor about them specifically.  We have made peace with our lack of water pressure and our groaning showerhead, but the inability to run modern appliances – albeit those particular power gluttons – is proving to be frustrating.  Ben had high hopes that we could get a few window air conditioning units next summer so we wouldn’t have to spend our evenings sweating and swatting the bugs coming through the screens.  More pressing is our desire to use our space heater to warm up the bathroom or bedrooms for pre-bedtime kid tubs since the upstairs doesn’t heat up very quickly.  Neither will happen.

A lack of power in the house presents another problem.  It requires the frequent resetting of the breakers in the basement which involves actually getting into the basement without great bodily injury.  The basement stairs are made of 400 year old logs that were clearly hand cut, shaped flat on one side, connected with bored holes and pegs, and have seen better centuries.  The ceiling directly above the entrance to the basement staircase is head contusion low because of an extra board that is being used to strengthen the main staircase in the house directly above.  Not only does this board prevent my stair stomping children from falling through the brittle landing, but it also prevents them from falling through the stair landing and then falling down the antique tree stump stairs next to the foundation made of big rocks.  Ben thinks the adults are more at risk of breaking through the landing than the kids.  In how many houses do you risk falling through the stairs only to then fall down the stairs?

While ducking down to avoid the ceiling you then run into the problem of the stair railing.  It is precariously positioned so far to the left of the stairs you have to lean over to the side to keep from falling straight down.  And finally, if you can make your way down the stairs you then have to contend with the fiendishly plentiful spiders that have used the space as their “man cave” since time immemorial.  Ben curses about the electricity going out, bangs his head on the ceiling on the way down, searches for the faint pencil writing on the label that identifies the affected circuit – by a low watt bare bulb, of course – and then pushes in the breaker button (yes, push button), while swatting spider web throughout.  I stand at the top of the stairs making sure the spiders don’t make a run for the first floor and shudder at the thought of doing any of this myself, let alone in the dark.  Better to have soupy ice cream and wear fleece-lined flannel catsuits.

It is times like this I yearn for my Colorado house and its glorious 1980s modernity. 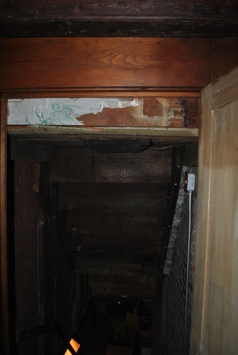 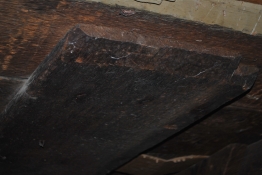 Supporting beam on bottom of landing/top of basement 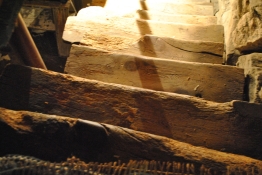 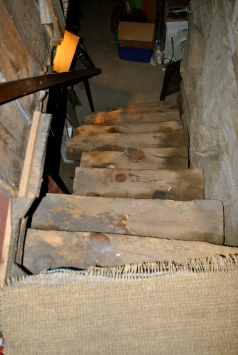 Update: Today, while taking pictures of the basement stairs,  I noticed a small piece of cardboard – about 5″x6″ –  stuck in the ceiling next to the aforementioned ceiling board.  “Why is that there?” I asked Ben and was told purely  for aesthetics.  It is covering a crack in one of the floorboards on the landing so you can’t see up through the basement.  I have to admit this is the most troubling aspect of the house.  The house is old, but clearly well made in the very fact that it is still here.  The stairs, as deadly as they are, still stand. The foundation, while reinforced with concrete, still stands.  I trust the bulk of the addition in the 1960s and the general updating throughout the house in more recent years was done correctly and is up to present day code.  And then I find a piece of cardboard stuffed in the ceiling to cover a crack.  “They really don’t make them like they used to” comes to mind.

One thought on “Circuit Breaker”